With the acqusition of Nimble a year and a half ago, HPE adds an important stack of storage arrays into their storage portfolio. What does this mean for the existing solutions MSA, StoreVirtual and 3PAR?

Today Nimble has 3 series of storage products in its portfolio: The AF-series are All-Flash arrays delivering the highest performance, where the CS-series are ‘hybrid’ arrays hosting SSD and HDD storage. The SF-series are as well flash arrays but more positioned in the secondary storage area acting as a backup target. There are some specific features in the Nimble portfolio that we don’t see in the current HPE storage portfolio:

Every AF-series consists of a controller head shelf (4U) and can be expanded with expansion shelves adding more drives to the system. Every shelf can hold 48 SSD’s by using Dual-Flash Carriers (DFC) modules holding 2 SSD drives in 1 3,5” carrier. Since there are 2 independent banks in each carrier it allows to start with 24 SSD’s in a shelf (populating always bank A) and adding more capacity afterwards by filling up bank B. A bad SSD can be replaced as well per bank, not per carrier. In the back, we find the typical items we expect in a storage system: redundant power supplies, fans and controllers with I/O options. 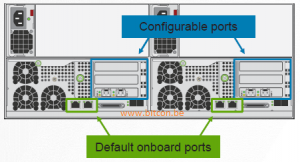 By default, there are 2 onboard 10Gbase-T ports per controller. This can be expanded with 1Gb and 10Gb Ethernet ports and 16Gb FC cards. Mix of port types is supported. The AF-series are a true scale-up/scale-deep/scale-out solution. You can scale up the array just by replacing the controllers with a more performant model: The procedure is rather simple: replace the standby controller, make the standby controller active, and replace the prior-active controller. Scale-out is possible by coupling up to 4 of any Nimble arrays into 1 cluster. You can mix and match array types in a simple configuration, performance is linearly scaled.

The hardware is similar to the AF-series. Head shelf with additional expansion shelves, 4U and 24 3,5” slots. However in this hybrid model there are 21 HDD drives and 3 DFC slots for 6 SSD drives.

The SSD drives will act as caching tier for the HHD drives. When expansion shelves are added, all these shelves must have SSD’s populated as well.

Connectivity options at the back are the same as the AF-series.

The same features for scale-up/scale-deep/scale-out remain the same as well.

The SF-series are again similar systems with some specific features:

Which makes this array ideal in backup and dev/test environments. 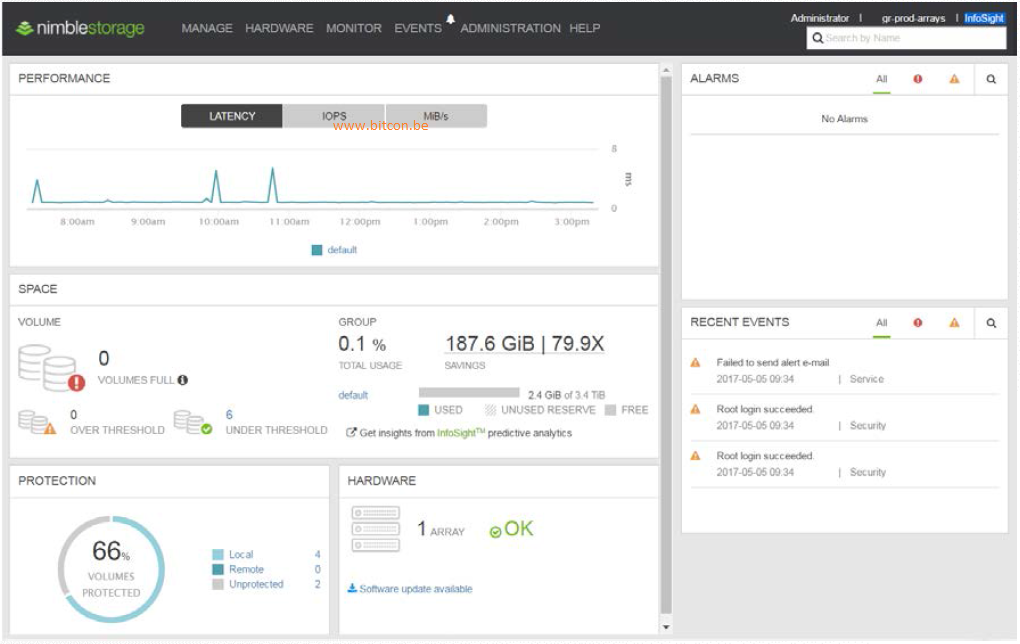 Nimble OS is the firmware running on all Nimble arrays. Exact the same version runs on all 3 types of series available today.

A feature release is to be expected every 6 to 9 months, we’ll see how this evolves inside HPE.

The Nimble UI is rather straightforward with all the information you can expect from a storage array: space, performance, events, hardware status and protection level.

Further they have their own MPIO plugin (Nimble Connection Manager) for the most popular OS’s in this world. Further there is tight integration with VMware vCenter (look further). 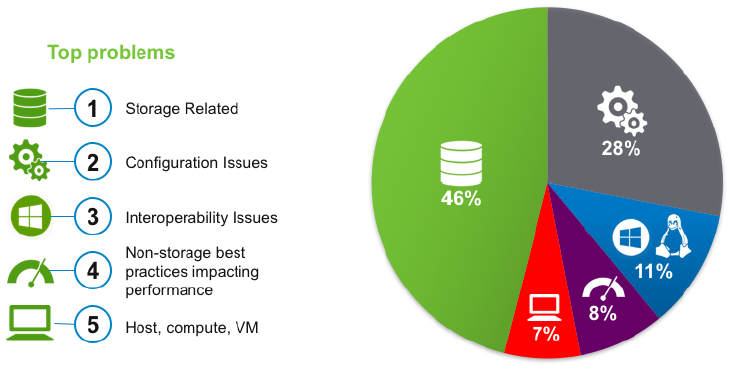 For me the most important feature and must-have from Nimble is the InfoSight stack.

InfoSight is a cloud based platform (https://infosight.nimblestorage.com/) that will correlate all data points measured in all Nimble systems worldwide and gives some nice added values:

All this information is stored in a (really) big Vertica database (today 650TB and growing). Nimble states that with all Nimble systems installed worldwide they measured >99,9999% availability and could predict and prevent 86% of detected issues being solved and closed automatically. They guarantee as well less than 1 minute to get a Level3 engineer on the phone. Resulting in a high customer satisfaction.

By measuring all this, Nimble detected that more than half of the problems happen outside the storage array. With the tight vCenter integration InfoSight has a full view on the entire stack, from VM up to the disk, and all in between. If you would like a more in depth review of the features and benefits please have a look at this whitepaper prepared by our partners over at Synnex: http://www.hpezone.com/assets/pdf/Synnex_eBook_HPE_Nimble_Flash.pdf