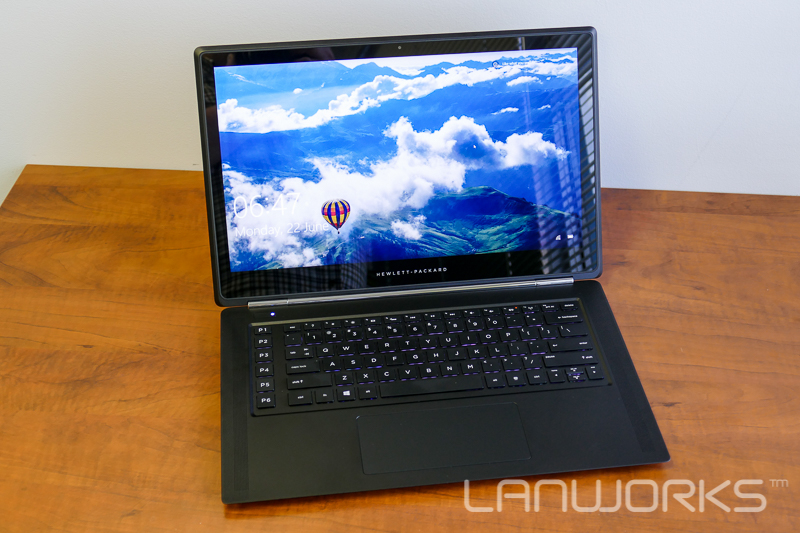 Thin and light is in. Well, it’s actually been ‘in’ for some time now, ever since Intel coined the term ‘Ultrabook’ a few years ago. Now almost every business notebook can be considered an Ultrabook, even many of the larger more traditionally 15-inch models. However, there are still a few categories where it’s a little harder to find a sleek and light machine, and the workstation notebook category is one.

Mobile workstations like the HP Zbook 15 G2 and Lenovo W540 fill those needs very well. The ZBook’s are incredibly powerful — in fact, many of Lanworks’ engineers use ZBooks. Unfortunately, the big disadvantage of these are that they are anything but thin and light. The ZBook 15 is 1.2-inches thick and weighs over 6 lbs. What do you do if you need a workstation but don’t want to lug around such a behemoth? HP now has a solution for that with the new HP Omen Pro. 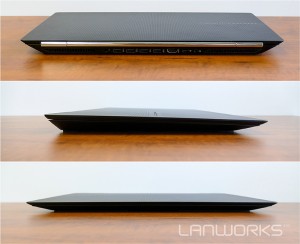 The Omen Pro Mobile Workstation is based on one of HP’s top-end Omen gaming notebooks. Since gamers are just as demanding of the power of their machines as graphics and engineering professionals, you know that using a gaming notebook as a base is a good start. The Omen already comes with a quad-core CPU, lots of memory and fast SSD storage packed into a sleek all-metal chassis. It is also thinner (0.78-inches) and considerably lighter than other workstations at 4.7 lbs.

Of course, to make the Omen suitable as a workstation, HP did have to make a number of changes to the Pro model. Instead of a gaming graphics card, the Omen Pro has ISV certified NVIDIA Quadro K1100M dedicated graphics onboard. The Pro also runs the Professional version of Windows (7, 8.1 or 10) and it has an upgraded 3-year on-site warranty. Also, unlike the ZBook workstations, the Omen Pro has a touchscreen.

This is, of course, either good or bad depending on your thoughts about touchscreen in general. Around back are four USB 3.0 ports, a mini DisplayPort, and HDMI port and a headphone/microphone combo. Unfortunately, unlike the ZBook, there is no Thunderbolt port or Ethernet port (though HP does include a USB to Ethernet dongle in the box). As can be seen in the picture below, despite turning professional, the Omen Pro still has the cool glowing red cooling ports on the back. 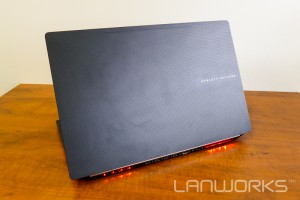 We were able to test the Omen Pro out for a few weeks, with one of our staff using it as a replacement for his ZBook 15, and there was a lot to like. It is one of the most attractive, dare we say sexy business-class machines that HP has ever made. Its all-metal construction looks slick and is very well made and solid. It has a full-sized keyboard, large trackpad, bright and crisp display and is very, very powerful, especially if you max out the specs. You can configure it with up to a 2.5 GHz Core i7-4870HQ CPU, 16 GB of RAM and a 512 GB Z Turbo Drive PCIe SSD. It powered through every task we gave it without breaking a sweat.

However, there are a couple of areas we’d like to see improvements made. As the first generation of a new style of workstation, we don’t expect perfect, but if the next version of the Omen Pro could incorporate a few changes, it’d be better off. Firstly, its battery life isn’t the great. While we don’t expect Ultrabook levels of battery life, it’s painfully short, as is to be expect of a workstation. Unlike its ZBook brothers though, the battery is not removable, so it’s not like you can carry a spare with you. Hopefully, the next generation of Intel’s quad-core mobile processors are more power efficient which will lead to better battery life.

Also, since touchscreens aren’t for everyone, a non-touch option with an anti-glare display should be available. The current model’s touchscreen display is very glossy, so not ideal for use in brightly lit environments. Another issue is that the maximum resolution tops out at FHD (1920 x 1080), whereas other mobile workstations including the ZBook are available with higher resolution QHD+ (3200 x 1800) displays. We’d also like to see a few more ports on the back. Since the HDMI port is probably there because of its gaming notebook roots, on the next Omen Pro we’d hope HP would remove it and put an Ethernet and/or Thunderbolt port instead. The Omen Pro isn’t for everyone, and a few other compromises, like the lack of a numeric keypad, no optical drive, and fewer expansion options means that for some users the ZBook is going to be the better option.

Still, despite these criticisms, we think that the Omen Pro would be a perfect choice for the mobile professional who is always on the go, but still wants the most powerful portable machine possible. The Omen Pro is a very powerful, sleek, light (for a workstation) and sexy hunk of professional hardware, and we highly recommend taking a look at it if you are in the market for a new mobile workstation. You can read more about it here.