As hackers are exploiting IT vulnerabilities, ransomware is becoming very pervasive and sad to say, rewarding for them in manipulating unsecure environments.   As organizations, are getting more and more focused in counteracting potential threats, a typical proactive first line of defense is to perform a cyber security “IT Penetration Test”, commonly referred to as a “Pen Test” (in other words – an Ethical Hacking Test).

A Pen Test identifies potential weaknesses and possible entry points into an IT infrastructure.  With the use of sophisticated tools, approaches and methodologies, organizations can perform simulated cyber-attacks, to fully understand current strengths and weakness of their security systems and policies…so they can ultimately harden their infrastructure.

With Ransomware, Bitcoin and strategies on how to protect ourselves becoming a daily topic around the watercooler; how safe are we? Antivirus, antimalware, in-cloud inspection are only as good as the patterns they are aware of. We protect our local data and critical systems by making backups of backups just to be able to recover from a ransomware attack and not pay the ransom. Then there is the cloud; Email, documents, databases and how safe are they? For the small to medium size business the term cloud gives end users and management a false sense of security that things are “OK”, providing the sense that we are immune to the vulnerabilities of local data.

I hate to be a bearer of bad news but there is hope – just keep on reading. Lately ethical hackers have developed and tested, a ‘ransom cloud’ strain that specifically targets Office 365 email users (cloud). The most common ransomware delivery tactics utilize social engineering in giving hackers full access to the email account. Once the targeted user clicks the link in the email, it really is game over. Within minutes the entire mailbox, emails and attachments are encrypted in real time. In addition, the infected mailbox receives a ransom email containing instructions on how to recover the data.

As per the graphic below, the encrypted emails are highlighted and the associated recovery instructions are detailed. Scary, isn’t it? 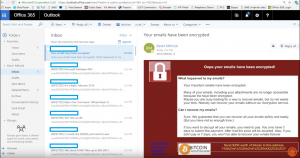 If the user does not have a proper backup of the .OST or .PST file there really is no easy way to recover them. Pay and pray is the way.

Can this be avoided? Maybe. It is getting harder for users to identify what is real and what is fake among the hundreds of emails they receive daily. We can certainly train our users and expose them to simulated threats and capture statistics, but this is typically not a priority. The best way to protect ones self is to always have a backup of all your emails. Old school, we used to that with .PST files when we had size limits on our mailboxes. New school, there are now solutions that will seamlessly backup your Office 365 emails directly from cloud to cloud, by maintaining potentially infinite number of restore points and providing instant recovery of emails. Can we prevent users from being ‘infected’, not really, but we must never stop trying. There are no tools or software that will stop the ‘click’.

What we can do; however, is give users a little more assurance that if things go sideways, there is an easier way to recover and it does not require Bitcoins. Please remember that this attack vector has been kept in the lab, so far; and when it does escape into the wild, we will be a little more cognizant of its existence. Furthermore, it is most likely that OneDrive will be targeted next.
Remember, think before you click!

If you have any questions regarding cloud email best practices, including how to protect your environment please contact Lanworks, we are always here with customer tested and customer proven solutions. 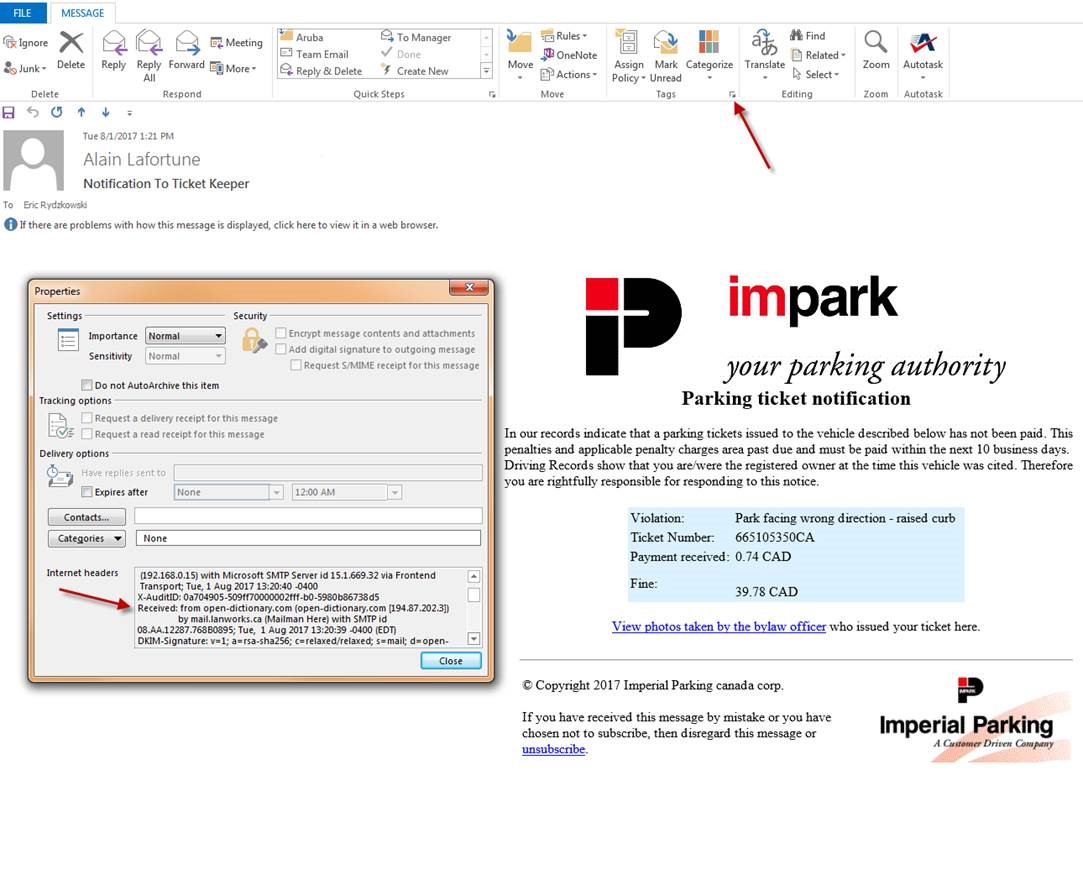 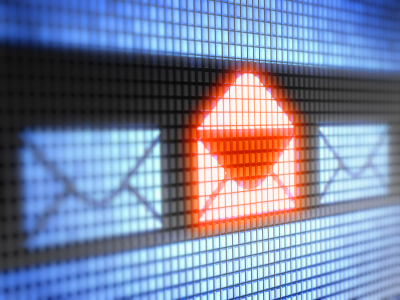 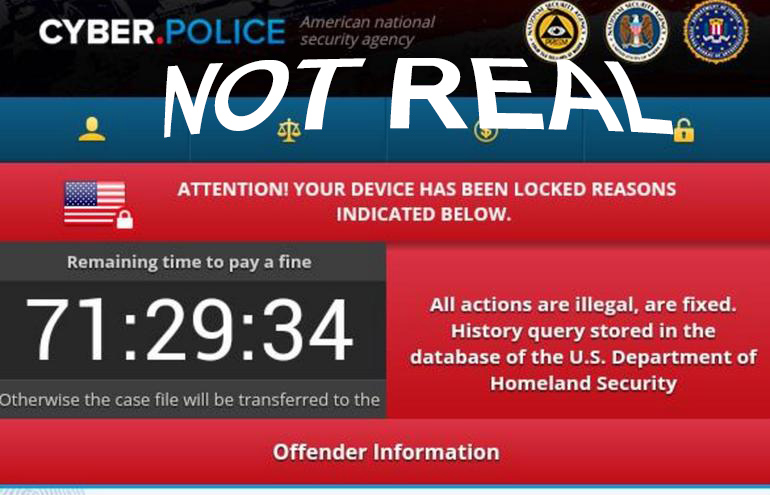 That is the estimated amount American users paid to unlock and restore devices hit by ransomware last year.

A report by Symantec states that ransomware increased 35% in 2015 and is now targeting not only Windows-based systems but also smart phones and systems that run on Mac OS and Linux. Recently, security and antivirus labs reported that attacks on smartwatches and smart TVs are starting to occur and this has implications for the business world.

So What is Ransomware?

Ransomware is malware that locks a device or encrypts its content before asking for a ransom to unlock or decrypt the content. The cost to restore access or decrypt content varies and is usually in the range of $30-300; nonetheless, payments of up to $10,000 have been reported to the Internet Crime Complaint Centre (IC3). You may even remember the University of Calgary recently paying a $20,000 ransom after its systems were attacked.

Locking and encrypting malware usually targets vital business systems such as a computer that is processing customer orders, a CRM that is installed on-premises, a database, or another business critical device or application. This is the classic ransomware attack scenario.

The rapid adoption of BYOD (Bring Your Own Device) practices within corporations has increased the risks of a critical mobile device containing essential business data being locked by attackers. A good number of senior executives and high-ranking employees use their own mobile devices to access corporate data and connect to corporate networks.

Recently, security researchers reported that some 85 million devices running Android worldwide are infected with a malware that can easily turn into ransomware. Only one of many existing malwares that can be exploited as ransomware is referenced; therefore, corporations should take measures to protect themselves against such types of known security threats. Even the yet to be released Android Nougat operating system does not provide 100% protection against ransomware that can lock users out of their smartphones or tablets. The iPhone is also vulnerable to ransomware attacks, which is one more reason to implement measures to protect business critical systems and devices.

The number of reported ransomware attacks on businesses should alarm corporations. Kaspersky Lab reports that between 2014 and 2016, the percentage of corporate users attacked by such malware nearly doubled to 13.2% of all ransomware attacks. So a threat that was aimed primarily at personal users has rapidly evolved into a full-fledged tool to blackmail corporate users.

With such a rapidly growing number of ransomware attacks on business critical systems and mobile devices, protection against this kind of malware is not only important but should be considered compulsory. Taking into account that such malware is targeting both corporations and public organizations, the estimated cost of damages from ransomware attacks is in the range of hundreds of millions dollars a year. Protection against ransomware has to be an essential component of any full-fledged antivirus and IT security system aimed at protecting the on-premise systems and mobile devices used by any organization.

Does your IT security system and your employee security training protect you sufficiently? Contact us for a security assessment.