The basic definition of a SmartNIC is simply a NIC that has intelligence and can be programmed. A good working definition is that a SmartNIC is a NIC that includes additional onboard computational resources accessible to the customer, along with the tools to program and utilize those resources.

With data center networking today at 25 GbE and moving to 50 GbE and 100 GbE, additional computational resources on a SmartNIC are becoming necessary to offload the server’s CPU for other tasks. Data center NICs today handle millions, and potentially more than one hundred million, network packets per second. Server CPU cores, even those clocked at or above 3 GHz, aren’t up to the task of inspecting and acting upon millions, much less tens of millions, of packets per second each. There aren’t enough instructions per second to keep up with these volumes.

CPU offload is a significant value proposition for a SmartNIC. Computationally intensive tasks like hashing for blockchains and transcoding video can be handled by the SmartNIC itself, freeing up precious server CPU resources.

Blockchains rely on solving proof of work. The first node on a network that reaches a solution is provided a reward, and then permitted to bundle up and publish the next block on the chain. SmartNICs can hold the blockchain and pending transactions in memory while computing the next solution. If they win, then the SmartNIC publishes the block and moves on to the next block.

Video transcoding is another popular host CPU offload that lends itself well to SmartNICs. Transcoding video using adaptive-bitrate (ABR) compression to support mobile devices is another CPU-intensive task, particularly for live video applications. These compression tasks are extremely linear and have been ported to Field Programmable Gate Array (FPGA) based accelerators where they’ve proven to be 10X to 20X more efficient than general-purpose CPUs.

An excellent example of an FPGA-based SmartNIC that includes an Arm complex and a network processor is the Xilinx Alveo SN1000 SmartNIC.

SmartNICs are just recently appearing on the market but as datacenter networking speeds approach 50 and 100GbE, the need to offload server CPU exists more and more. Probably one of the biggest drivers toward this technology is going to be blockchain compute requirements followed by Video adaptive bitrate compression. Albeit a very niche use-case now, these cards will possibly become the norm in servers in the next 5 years.

What does DMARC actually do?

DMARC is a protocol that protects your organization from emails sent by fraudulent imposters. The most simplistic analogy is you can very easily send a nasty post mail to Prime Minister Trudeau but put your next door neighbor’s full name and return address on the envelope making the letter completely appear as if it was sent by your innocent neighbor. The exact same applies to email and DMARC is a method to prevent this from happening.

Why would you need it?

Lanworks has several customers in which their internal email address books have been compromised and used by fraudulent imposters to send phishing emails to their own customers. You can imagine the embarrassment and damage control required to convince your best customer that the well-crafted phishing email they just received with your president’s name in the “From” field is in fact fraudulent. This is reality and it happens all the time.

How Does DMARC prevent this?

Now this is the complicated part of this Blog.

DMARC builds on the widely deployed SPF and DKIM protocols, adding ties to the author’s (“From:”) domain name. The SPF and DKIM fields are typically set in your DNS records

SPF: allows senders to define which IP addresses are allowed to send mail for a particular domain.

DKIM: provides an encryption key and digital signature that verifies that an email message was not faked or altered.

DMARC: unifies the SPF and DKIM authentication mechanisms into a common framework and allows domain owners to declare how they would like email from that domain to be handled if it fails an authorization test.

The options for a failed email authorization are:

None: treat the mail the same as it would be without any DMARC validation

Quarantine: accept the mail but place it somewhere other than the recipient’s inbox (typically the spam folder)

Reject: reject the message outright and discard it

What Does a Simplistic DMARC enabled Email Flow Look Like?

DMARC is a very important and effect mechanism to prevent fraudulent or spoofed email and every company should implement it. That being said, DMARC is not that straight forward to correctly setup. Lanworks has the experience to properly deploy DMARC/SFP/DKIM and our professional team would be glad to provide the required consulting to perform the work. 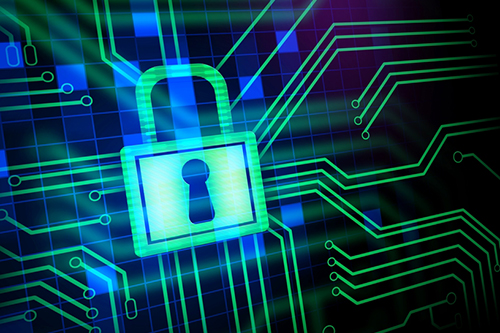 This past week I was at the Juniper Partner Conference in Miami, where I sat through a number of talks and seminars. One of the sessions was about network security, and while taking notes, I tried to imagine what the future of network security should look like. So many organizations have routers, firewalls, anti-malware devices, IPS, wireless, network and endpoints – all from a variety of manufacturers. The key piece to note is they don’t really talk to each other to “share” what they are seeing on the network.

From the sessions I attended, I learned that large Fortune 100 companies spend upwards of 45% of their annual IT budgets on the operational maintenance, subscriptions, care and feeding of these elements in their networks. In many cases, logs or alerts from these devices are not proactively monitored or they go un-actioned in many organizations (e.g. Target security breach in Nov. 2013), which effectively makes them useless. A three-year study by Verizon Enterprise Solutions found that companies discover breaches through their own monitoring in only 31 percent of cases. For retailers, it’s 5 percent.

In the future, various elements of a network have to talk to each other.

There needs to be a “Security Back channel” that firewalls, IPS, malware, anti-spam, load balancers, routers, wireless controllers, switches and end points all use to talk to each other using a standard protocol that is vendor agnostic.

Let me provide an example. If a connection request to Amazon.ca is coming from Vietnam, the router (using reverse Geo IP lookup) is the first to see it and should raise a yellow flag on the security back channel. Now the firewall looks at it already knowing this is a suspect connection since 95% of requests come from a Canadian IP address. This may in itself trigger the Vietnamese connection to go through a more rigorous inspection (kind of like going through a pat-down at the airport with a sniffer dog giving you a once over at the end).

The example above stops at the Amazon Web server, but network switches and even endpoint devices must have the intelligence to be part of the kill chain that detects, notifies and reacts to malicious connections. Switches must be able to monitor and record “normal” behaviour for each node connected to them. Should a switch detect a ping sweep or other non-characteristic behavior from a particular node, it should be able to shut it down and notify all other network elements to beware of this node.

As I see it, the only way corporations will be able to keep ahead of the ever-improving security threats is if all network elements work together and “behave” as a single element when it comes to security. Unfortunately this cooperation among vendors does not exist today but hopefully one or more of the larger players will start the development of such an initiative, the security of our information relies on it.